Proclamation service held in Dronfield to announce the new King 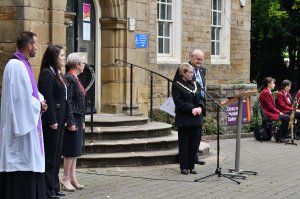 A local Proclamation to formally announce the accession of His Majesty, King Charles III was held in the library gardens in Dronfield.

Residents and officials attended the event on the steps of the library in the Manor Gardens at 4pm on Sunday, 11 September 2022.

At the end of the ceremony, the Mayor led a rousing three cheers to HM King Charles III.

This ceremony mirrored readings of the Proclamation in cities, towns, districts, parishes, and boroughs around the nation.