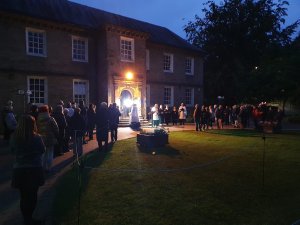 The community was invited to gather together for a National Moment of Reflection on Sunday 18th of September at 8pm, to allow people to celebrate the life of Queen Elizabeth II. The event took place in the Manor Gardens outside the Library in Dronfield.

Many members of the public gathered for the event, which was led by Reverend Ian Webb, from the Parish Church. As part of the service, Dronfield Parish Chorale sang the Russian Orthodox Kontakian for the Departed conducted by Robert Aldread.

The Deputy Lord-Lieutenant, Mr Ken Cook CBE paid tribute to the Queen during the moving service, sharing his memories of Her Majesty the Queen, followed by the Deputy Mayor, Councillor Susan Burkitt, who read "Floral Tribute", a poem written by the Poet Laureate, Simon Armitage as a tribute to HRH Queen Elizabeth II.

The last Post was played, and this was followed by a minute's silence to reflect on the life of HM Queen Elizabeth II. Prayers then completed the event.