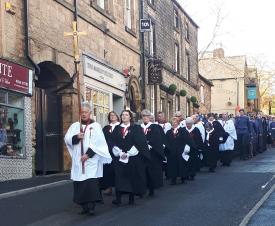 Residents lined the pavements in Dronfield yesterday, Sunday 10th November, to watch the Remembrance Sunday Parade as it made its way from School Lane to the Library Gardens and back again.

A Service of Remembrance, held from 10.55am at the War Memorial, was attended by service representatives, cadet, youth, and voluntary organisations, Church representatives as well as crowds of families and individuals.

There was a two minutes silence at 11am as the Last Post was played and then wreaths were laid at the side of the War Memorial on behalf of various groups and organisations with Town Mayor, Cllr Lilian Deighton, laying one on behalf of the Town Council.

Sheffield Concert Band accompanied the Parish Church Choir with hymns and the service and prayers were lead by Rev Peter Bold.